I have written in the past about the decline in the abundance of Milkweed and the corresponding decline in Monarch Butterfly population. This year I discovered a caterpillar on my milkweed that I had never encountered before: the hairy caterpillar of the milkweed tussock moth. 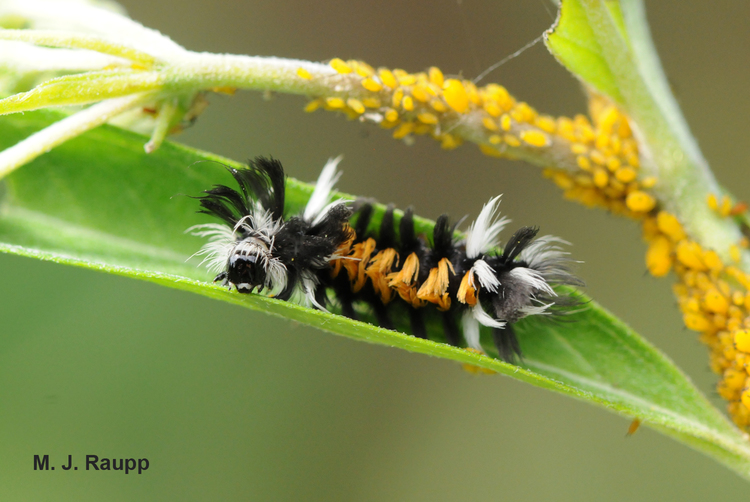 It reminded me of cross stich embroidery or a hooked rug! It is obvious why it is also called the milkweed tiger moth. Too bad the resulting moth is a simple drab brown!

The leaves and sticky white sap of Milkweed contain nasty chemicals, which at higher concentrations can be heart poisons bringing death to humans and other animals foolish enough to eat them. However, insects that eat milkweeds have evolved mechanisms to deal with these toxins and have the ability to consume leaves of milkweed without being poisoned. In fact, they store these noxious compounds in their bodies and retain them as they develop into a butterfly or moth.

These compounds cause predators such as blue jays to vomit dramatically following an attempted monarch meal. Blue jays exposed to monarchs soon learned to recognize the monarch by sight and avoided eating these beautiful, but nasty tasting butterflies. Many of the insects that live on milkweed and consume its leaves display vivid patterns of orange and black as both juveniles and adults. (The Viceroy butterfly closely resembles the Monarch and is also nasty tasting.)

Orange and black warns predators not to mess with milkweed tussock moth caterpillars. But primary predators of the adult drab brown moth are fearsome bats that hunt at night using sound rather than sight to locate prey. With few sighted predators, orange and black coloration has little value. However, the poisons stored in the body of the moth are put to good use. Instead the resourceful milkweed tiger moth evolved an organ that emits an ultrasonic signal easily detected by bats. The signal warns that an attack will be rewarded with a noxious distasteful meal and bats soon learn to avoid the tiger moth as prey.

An amazing statistic: Like the caterpillars and butterflies, you are what you eat. But apparently we buy too much or we don’t eat enough of what we do buy.  According to the U.S. Department of Agriculture, every American wastes a pound of food a day with fruits and vegetables being the most often wasted.

Here’s another: Millennials not seniors are most vulnerable to scammers.  The FTC reports that 40% of the people who lose money to scammers are in their 20’s.  But the largest sums of money lost are by the elderly –scammers follow the money.

One More: 63% of millennials hardly ever use cash, opting for mobile & messaging aps.

LIFE SAVING TIP:AAA reports that dozens of people have died from carbon monoxide poisoning fumes when cars were left running in garages. Today’s cars run so silently, especially hybrids that owners of keyless ignition vehicles forgot to push the button to turn the car off! If you have a vehicle that does not shut off automatically consider,   PUTTING UP A SIGN TO REMIND YOU!

A Dog’s Tale: Triple Goes Over The Rainbow Bridge

Most of you know about my therapy dog Toto, but what many do not know is that we also had a “non-therapy” rescue named Triple B, short for Big Boned Basset!  Triple came to us VERY overweight and with some bad behaviors learned in his early years.We put him on a diet and worked on his fears and he responded with great aplomb.  He got down to his proper weight, but years of stress on his long back bone set him up for disaster.

A year after he arrived at our home, he slipped a disc and crushed his spinal cord severely.  We had to make a swift decision at 2 a.m. to authorize either euthanasia or perform the surgery with no guarantee that he would walk again unassisted. But as my hubby said, “He is part of the family” so we opted to go for it and put off the bathroom remodel!With determination, hope and hard work, we were not about to let Triple down.  In combination with veterinary rehab, which included a water bed tread mill, I walked Triple with his rear in a sling 3 times a day (thank good ness it was summer!) followed by massage and stimulation.  (Having worked my first nursing job in the spinal cord injury unit at the VA provided a good background for this.) 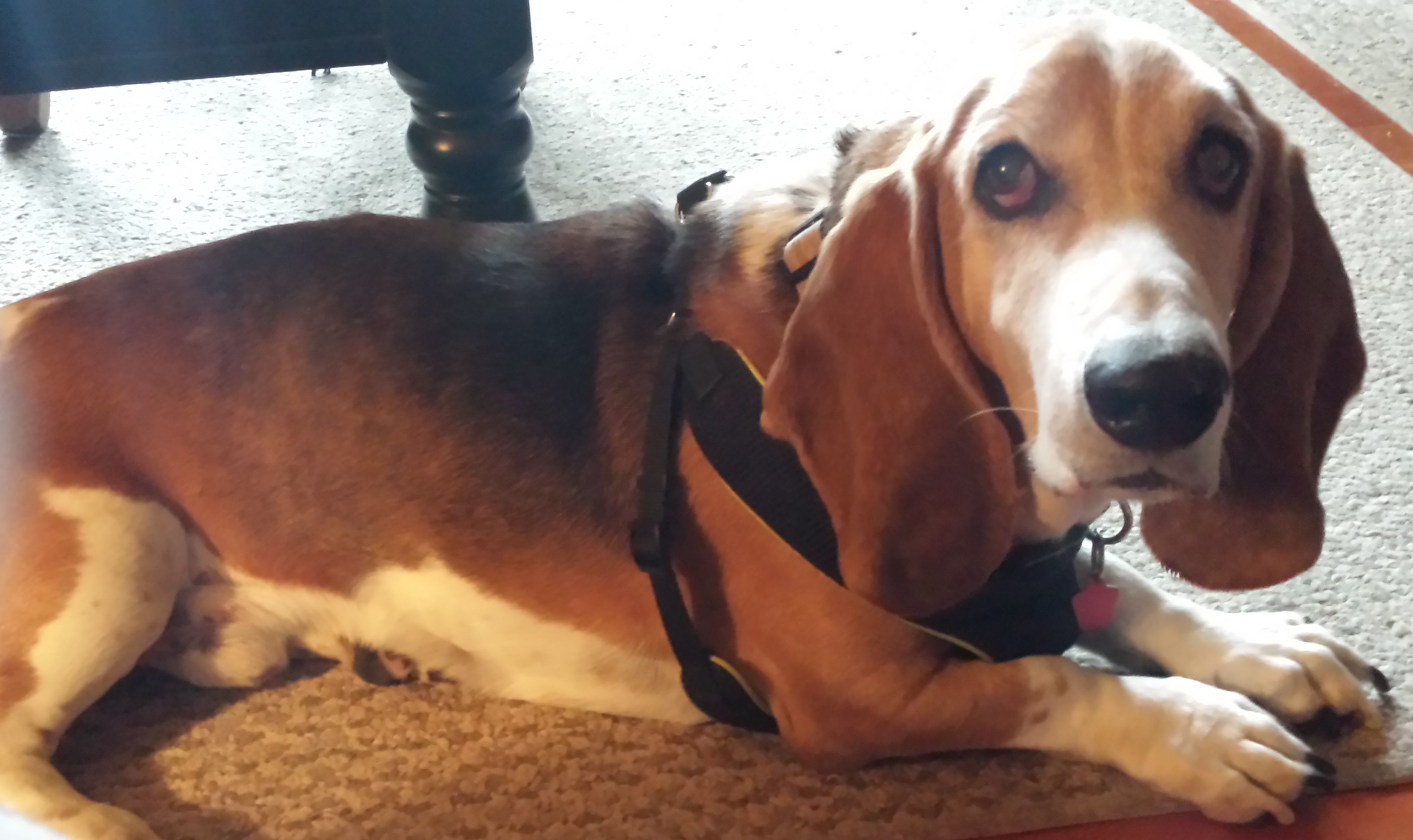 His progress was slow, but steady and his doctors were so proud of his achievements.  By the time winter came along, he was walking without his rear harness, although he did have a wiggle or what I called a “loose caboose.”  Sadly, Triple was found to have bladder cancer at his six month follow-up visit. It was inoperable and treatable only with a medication used for arthritis in humans but found to retard bladder cancer in dogs.  Once again he beat the odds living another 35 happy, pain-free months, instead of the 12 to 18 we were told to expect. In September, when we and he knew it was time, we called Mobile Vet and had him put to sleep on his bed in the kitchen.

I will miss my “kitchen assistant”, especially when I drop anything edible. I will miss the boisterous joyful “welcome home” squeals and looking into those big brown trusting eyes. But I will remember even more his resilience and love and am so glad we gave him his second chances.

Have a great fall season from all of us at LFG!