Beware the Ides of October or So It Seems by Tom Wargin CFA, CFP(R)

Politics aside, October has the reputation of being the beginning of crashes and depressions. We have all heard stories of the crash of 1929 starting on Black Friday. I remember Black Monday 1987 when the Dow dropped 22% in one day. Currently that would equate to over a 6200-point drop in the Dow taking it to around 22,269.

I do remember sitting in my office and getting a call from a client around noon wanting to sell some holdings. I had to inform him that the market at that point was already almost 5 hours behind and his trade would probably not go through until the next day. He decided to sit still. What many people forget is that the market recovered by the end of the year.  I also remember a similar situation in October 2008 and six months later the market had recovered also.

According to Investopedia, September has had more down months than October and the major crashes could be traced back to September. In fact, more bull markets have started in October according to them also. In reality October just gets a bad rap and is no more prone to crashes than the other 11 months of the year.

In most cases the media has hyped the October myth and chose not to assign the same terminology to downturns during other months. We try to look at the economic backdrop and possible corporate earnings to formulate an investment outlook and decide our risk allocations. We use several sources to get that data and do not rely on just one.

Currently, stocks have continued to do well since interest rates are low and will most likely stay that way for the next couple of years; this forces people into a TINE (There Is Nowhere Else [to invest]) decision. While stocks are fairly to somewhat overvalued, they are not approaching the levels of 1999.

As we make our way out of this pandemic over the next couple of years, the market will point the way for the economy generally, no matter who becomes president. We plan to guide you through these times as we have done before.

RMDs are waived for 2020 thanks to the SECURE Act and those of you turning 70 ½ this year have until you turn 72 to take your first Required Minimum Distribution (RMD), but you can still do tax-free Charitable Qualified Distributions (QCDs) from your IRA to your favorite charities if you are over 70 ½ which might reduce your RMD for 2021 and help a charity in today’s tough time as well.

Roth Conversions: This year and the next will be good times to check out if this is an option that works for you, especially since projections are that there is a large probability that tax rates will be higher in the future.

Medicare Open Enrollment through December 7: Be sure to check the changes to your plan, especially those in Medicare Advantage and Part D drug plans. It might benefit you to make a switch, especially if your meds, your health or your doctors have changed. A good place to contact if you need some help in figuring the best options for you is www.65incorporated.com developed by a nurse and her daughter. They do not sell insurance, just advice. The Medicare Plan Finder run by the federal government to compare plans is another option. 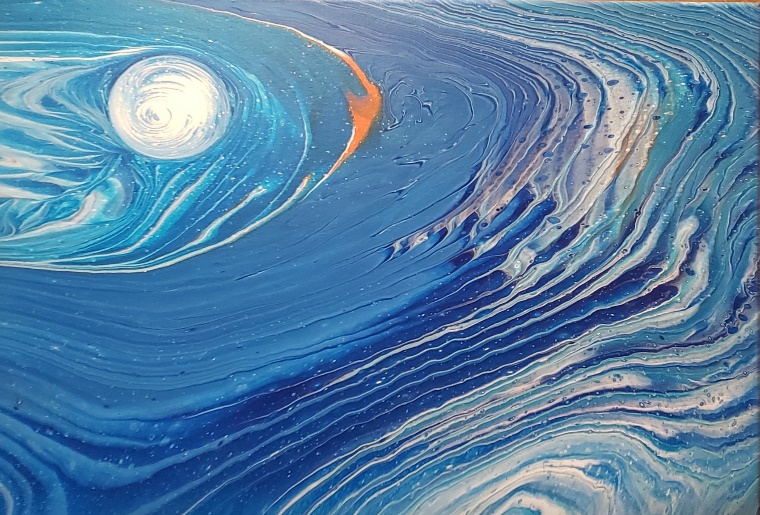 Nancy has always been interested in art and has let her creative juices flow in many directions from handcrafts to painting. Recently, her transition from watercolors to acrylics led to a new passion: “fluid art.” Fluid Art uses thin paints and various techniques like pouring or sprinkling, instead of traditional brushwork, to create one-of-a-kind pieces. The paint seems to come alive on canvas or other objects she “upcycles” such as tiles, tables, and vases, giving them new life and purpose.

Her current focus is on creating large flowing pieces each telling a unique, vibrant visual story.

Nancy sees the world through colored glasses and is inspired by all that is around her. Visit our office for a look at a variety of her dazzling works.

In the past, Team Liberty has participated in various local community fundraising or support events from building homes with Habitat for Humanity, to food drives, to Special Olympics, and more.  This year many opportunities have been cancelled, postponed or gone virtual, but here is some of what we did as a company this past quarter:

Team Liberty participated in this year’s virtual Briggs & Al’s Run & Walk for Children’s Hospital Wisconsin. (We did not run, we all walked!) We each totaled at least 8k but Tom won in distance as usual!

June added to “giving back” by taking part in the Walk to End Alzheimer’s Washington County with an additional 8k done in spurts with her cane and dog!

Keep saving: You are no longer prohibited from contributing to an IRA if you are over 70 ½ and earning “compensation.” Talk with us about whether it would be better to add to your Roth instead!

Kiddie Tax: Back to the old rules! Income for children under 18 now to be taxed at parents’ marginal rate again.

Stretch IRA: Gone for most. Revisit your estate plan to maximize benefits for your heirs since except for a few exceptions most will have to liquidate their inherited IRA in 10 years.

CARES Act Benefit: Even if you don’t itemize and use the new standard deduction, you can deduct up to $300 per tax return for cash charity contributions on your 2020 return!

STIMULUS Payments: Designated as prepaid tax credits, they are not taxable on your 2020 returns!

FAFSA: Time to fill out the FAFSA application for the 2021-2022 school year. We recommend that ALL who have college bound students complete this no matter what your income level.

This year, funds withdrawn from 529 plans can be used to pay down student loans which might be an option if tuition was lowered due to virtual learning.

COLA for Social Security: There will be a 1.6% cost-of-living adjustment for 2021, but there is a bill proposing to increase that to 3%. Stay tuned!